Pokémon Go is a phenomenon, there’s no better way to describe it. It has taken over social media and quickly become the number one app for both iOS and Android. It’s even helped Nintendo’s plummeting stock prices . 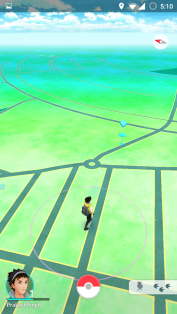 But will this mobile game be as successful in India as it is abroad? Well the pokémon Anime has millions of fans in this country and there is no reason that most of them wont give the game a try or more. Pokémon Go is already a hit in the few countries that it was officially released. But you can get the .apk file from websites like apkmirror and play it right now like I am doing.

What makes Pokémon Go a success worldwide is its simple approach and mechanics. You start the game and you’re thrown into the world of Pokémon. Niantic, creators of Ingress , use their signature Augmented Reality technology to bring Pokémon into our world using your mobile device’s GPS.

Using this technology, Pokémon Go players are encouraged to go outside and find Pokémon, just like in the games and anime. It’s a perfect mix of nostalgia (for those Pokémon fans who always dreamed of going on their own Pokémon adventure) and simple gameplay to bring in any casual players or anyone not familiar with the franchise.

The mechanics of Pokémon Go consists of walking around until you find a Pokémon and flicking your Poke Balls on the touchscreen. Those are pretty much the basics and it allows for anyone young or old to get into the game.But Pokémon Go can be surprisingly deep if you choose to look into it, which stems from the random movesets given to captured Pokémon and certain evolved Pokémon.This little mechanic will lead to hours of grinding and finding the perfect mix of Pokémon and moves.

Unfortunately, battling is probably the biggest downside of Pokémon Go.Pokémon Go battles include locations that act as Gyms where teams collaborate to bring down its members. Once it’s taken over, you can put your own Pokémon there and become a Gym leader. Pokestops are places you can refill yourself with pokeballs and incenses. Hilariously most pokestops around my location were located at temples.

Sounds fun, right? Well, battles include players tapping at the screen and swiping left and right to left to avoid attacks….that’s pretty much it.

Pokémon Go incorporates type advantages and resistances to make it like the console games, but it’s a slog to take over Gyms. Even wild Pokémon (which normally need to be weakened by fighting) are caught just by flicking at random, making even the most experienced player frustrated.

But… for some reason, Pokémon Go just gets the Pokémon-catching experience right. It encapsulates that child-like joy of finding and catching Pokémon that you first felt 20 years ago.

There’s a lot to love about Pokémon Go , despite its flaws and shortcomings, and none of that detracts from the overall experience. And that’s exactly what Pokémon Go is, more than an app or mobile game, it’s an experience and opportunity to connect with friends.When’s the last time you made plans with friends to just take a walk? How about take a walk when you have some downtime? Pokémon Go has begun to revolutionize mobile game experiences, and everyone should get in on it.